skip to main | skip to sidebar

Pikk Hermann (Tall Hermann), the tower originally constructed by the Danes during the years 1360 to 1370, is 45 meters high and dominates the old wall surrounding . It is also the most sacred and recognizable icon of the Estonian people. The presence of the blue, black, and white flag, first hoisted up the flagpole on 12 November 1918, a few months after the declaration of independence, symbolizes free . 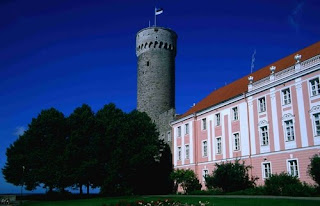 But the flag on top of this tower, as the country itself, has had a turbulent history. On 27 July 1940 the Russian invasion replaced the tri-color with a red Soviet flag. On that day my father was in and he remembered watching a young communist climb up the pole to release the Estonian flag that had been purposefully stuck up there and to replace it with the red flag. The German occupation the following year allowed for a brief flying of the Estonian flag, but then in 1944 the Red Army took over the country and the Estonian flag was not seen again for 45 years. It its place came a god-awful looking flag of the .

It wasn’t until 1989 that some brave Estonians defied the Soviet rules about national flags and ran up the tri-color, fully expecting to be arrested. But nothing happened, and the flag has been flying there ever since. It is probably difficult for people whose countries have not been brutally occupied by belligerent neighbors to understand just what the presence of that flag on top of Pikk Hermann means to Estonians.

The tower is attached to a large palace complex that was built by Peter the Great to house his ministers and bureaucrats who were to administer the Estonian colony. Over the years the building has maintained its governmental status, and today it houses the Estonian parliament, or Riigikogu. The front of the building looks across to the Russian orthodox cathedral, while the side runs into Pikk Hermann. The style of the architecture is clearly from the 1700s. 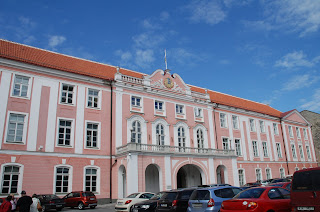 Nestled inside the large palace there is another building, constructed much later, that today houses the parliament chambers. The walls of the parliament assembly hall are flag blue, which is their original color from the 1920s. During the Soviet time the walls had been painted what can only be described as “first grade pale green”. 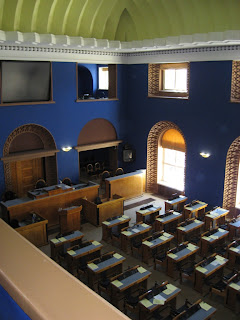 When we took the tour of the parliament building the guide explained that the design of the inner parliament building was in the expressionist style. I looked this up, and one of the definitions is that expressionism refers to art that expresses intense emotion. Such art occurs during periods of social upheaval and the art is supposed to have the power to move the viewer with strong emotion.

I am not so sure the parliament hall moves me with strong emotion, but I have no doubt that the flag on top of the tall tower attached to the building does.

Libby and Aarne
Kloostri 12. Pirita, 11911 Tallinn, Estonia
After careers in academia (UNC, Duke, and Bucknell) we are both enjoying retirement. We have discovered that our avocations easily make up the time we formerly spent grading papers and giving lectures. And perhaps most importantly, free time allows us the opportunity to use large chunks of it for various projects and adventures. One of these adventures is to stay for three months in Estonia, Aarne's ancestral home. We started this blog because our kids (mostly) are curious about our experiences here. They are all in the midst of their own careers and do not have the luxury of time that we enjoy, so this is mostly for them. But if friends also enjoy our occasional ramblings, then that is all for the best. Participation is welcomed and even cherished. Äitah!